Composition of the Board of Directors 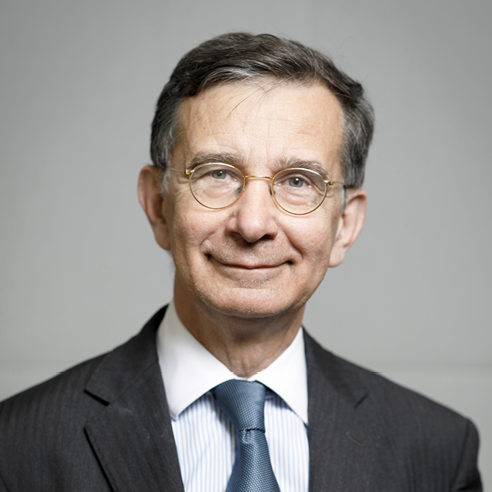 Chairman of the Board of Directors

Biography
Gilles Denoyel is a graduate of the Ecole Nationale Supérieure des Mines in Paris, the Institut d'études politiques (IEP) in Paris, and the Ecole nationale d’administration (ENA). He was appointed Finance Inspector to the Ministry of the Economy and Finance in 1981 before joining the French Treasury in 1985 as a project manager and then as Secretary General (1987) to the CIRI, Head of the Credit Insurance Office, Head of the Financial Markets Office (1989-92), Assistant Director of Insurance (1992-94), and Assistant Director of Holdings (1994-96). In 1996 he joined the CCF Group as Finance Director, Secretary General in charge of Strategy and Operations in 1998, then Deputy Director General Finance in 2000 and participated in the merger with the British group HSBC, where he continued his career as Deputy Director General of HSBC France (2004). There he was in charge of central and financial functions. In 2006, he took charge of the asset management business line, insurance activities and central non financial functions. From 2007, he supervised all the risk and control functions and relations with the regulatory authorities. In 2015, he was appointed Chairman International Institutional Relations for the HSBC group for Europe. Since retiring from the HSBC group, in June 2016, he was appointed Chairman of BGD Conseil, Senior Advisor at Bain Consulting and Operating Partner at Advent International. He was Chairman of the group of banks under foreign control in France from 2006 until 2016, and Treasurer of the French Banking Association from 2004 until 2016.

Other mandates and functions
Member of the board of the non-profit-making associations: Katholiek Onderwijs Kessel-Lo and Abbaye d’Oignies

Biography
Mr Bart Bronselaer holds a degree in industrial engineering (Group T - Louvain), as well as a master’s degree in information sciences (VUB) and a master’s degree in business administration (MBA – UC Louvain). The major part of his career (1993-2003) was spent with Merrill Lynch International in London, where he held various positions, the last chronologically as Head of Debt Capital Markets for Europe, the Middle East and Africa. There he had the task of structuring and selling financial solutions to various clients, such as financial institutions, industrial companies and public bodies. In 2003, he became an  independent expert in financial services.

Biography
​Giovanni Albanese has sound experience in risk management, acquired within the Unicredit Group, and over the last twelve years has occupied various posts in different risk management fields. Before that, he worked at McKinsey and with various firms of consultants. He has a degree in Engineering from the La Sapienza University in Rome and the University of South California, as well as MBA from the University of Bocconi.

Other mandates and functions
Director of the Silver Fund

Biography
Bertrand Dumont is a graduate of the Ecole Nationale d’Administration (ENA), the Institut d’Etudes Politique de Paris (IEP) and the Ecole Normale Supérieure Ulm. He began his career in 2001 in the Agence France Trésor where he held the posts successively of Deputy of the Secretary General of the "Club de Paris" and Head of Cash Management. He joined the International Monetary Fund (Washington DC) in 2005, where he was appointed Advisor and he became Alternate Executive Director for France in 2006. In 2007 he has been appointed Advisor for international and European affairs of the Cabinet of the Minister of Economy, Industry and Employment (Paris). In 2010, he became Advisor in charge of multilateral financial affairs to the Cabinet of the Vice-President of the European Commission in charge of the internal market and services (Brussels), where he was appointed Coordinator to the Cabinet in 2014. From 2015 till 2017 he joined HSBC France (Paris) as Head of Prudential Management. From 2017 till 2018, he was Deputy Director to the Cabinet of the Minister of Economy, Finance and Industry (Paris). Since 2018, Bertrand Dumont has been Deputy Director General of the Treasury.

Biography
Thierry Francq is an Ecole polytechnique and Ecole nationale de statistiques et d’administration économique (ENSAE) graduate. He began his career in 1988 in the direction de la prévision (Ministry of the Economy, Finance and Industry), as Deputy Head of the Foreign Bureau and then of the Financial Transactions Bureau. In 1992, he joined the Treasury department where he was Deputy Head of the Housing Financing Bureau and, as of 1995, Head of the Bureau in charge of French policy regarding the International Monetary Fund (IMF), the international financial system and the preparation of the G7 summits. From 2000 to 2002, he held the position of Deputy Head in charge of the regulation of insurance companies, products and markets and then, from 2002 to 2004, Deputy Head of the State holding department before being appointed Head of Economy Financing at the French Treasury. In March 2009, he was appointed General Secretary of the Financial Markets Authority (AMF). From December 2012 to September 2013, he was Executive Adviser to the CEO of the French Treasury. On 7 October 2013, he was appointed Deputy Commissioner General for Investment.

Biography
Véronique Hugues holds a dual Masters in Financial Markets from Paris IX Dauphine University and Johan Wolfgang Goethe University in Frankfurt. She started her career at Deutsche Bank in Paris in the ALM department and joined Dexia Group in 2001 to manage long-term financing. She took over financial communication in 2009 then became responsible for Financial Management, and a director of Dexia Kommunalbank Deutschland and of Dexia Sabadell in 2013. She was Deputy CFO of Dexia Group and a member of the Group Committee of Dexia SA from 2014 to 2016. She also manages several different transversal projects within the Finance support line as part of this mandate. Since June 2016, she's Chief Financial Officer and Member of the Management Board of the Dexia Group and Director and Executive Vice-President of Dexia Crédit Local.

Biography
​Tamar Joulia-Paris is a graduate of the Ecole polytechnique de Mons (Belgium), of the Ecole Nationale de Géologie et de Prospection Minière de Nancy (France) and of the Solvay Business School in Brussels (Belgium). After 10 years in the construction and manufacturing industry, mainly in emerging markets, she joined the banking industry in 1992. She started in BBL (now ING Belgium) as head of Credit Risk Management. She later joined the ING Group in Amsterdam where she was in charge of the group credit portfolio and the credit markets during the 2008 financial crisis. After more than 20 years, she set up her own advisory and training activity, focusing on the risk management in the financial industry, the impact of new prudential regulations as well as portfolio & balance-sheet optimization. She is also a guest lecturer at the Facultés Universitaires de Saint-Louis (Belgium) where she teaches risk management since 2004.

Biography
Alexandra Serizay is a graduate of ESSEC business school. She began her career in 1997 as an internal auditor at France Télécom Transpac, then joined Deutsche Bank in London in 1999 as business manager working in mergers & acquisitions. In 2004, she joined Bain in Paris and became a manager in 2007. In 2011, she moved to HSBC France, first as a member of the Executive Committee of HSBC France, in charge of strategy, and then, in 2013, she became General Secretary and a member of the Executive Committee of RBWM (Retail Bank & Wealth Management) and director in charge of customer developpement and offers in 2016. She joined the company SODEXO in September 2017 as Head of Global Strategic Planning Corporate Services.

Biography
Michel Tison, Doctor of Law, has been, since 1998, Associate Professor, and then, since 2008, Professor at the University of Ghent. He is the author or co-author of many publications regarding banking and financial law. From 2001 to 2014, he was an independent Director and Chairman of the Board of Directors of Aphilion Q2 (UCITS) and from 2005 to 2014, a member of the Audit Committee of the hospital of the University of Ghent. Since 2005, he has been an assessor for the “legislation” department of the Council of State.

Biography
The holder of a Master’s Degree in Mathematics from the University of Lille 1, Aline Bec has considerable experience acquired in major banking groups in France, such as BPCE, Natixis, Crédit Agricole, Crédit Lyonnais and the BFCE, where she held the posts of Head of IT Systems, Operations, Organisation of Real Estate and Purchasing. She was involved in numerous major projects and digital transformation programmes. Before joining the Dexia Group in October 2016, from 2012 she was with BPCE, where she held the post of Deputy Director General and was a member of the Executive Committee, responsible for IT Systems, Purchasing, Logistic Real Estate and Major Programmes.

Main function
Membre du Management Board of the Advance Ruling Service of the Belgian Tax Administration.

Biography
The holder of a triple Degree in Law (Fiscal, European and Private Property) from the Free University of Brussels, Véronique Tai first of all held the post of Corporate Finance Adviser at Coopers&Lybrand. In 1996 she joined SPF Finances, where in particular she made her name as Expert Adviser to the Cabinet of the Minister Finance in the Financial Markets Unit, before becoming an active member of the Management Board of the Advance Ruling Service of the Belgian Tax Administration. She is also a member of the Board of Directors of Rekode, fund manager at Inclusio and Chairman of the Board of Directors of FIF-FSI. At the same time, she lectures for the Master’s Degree in Tax Law at the Free University of Brussels.